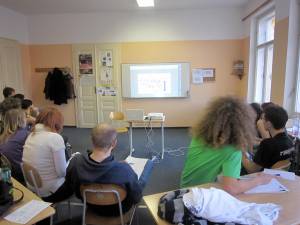 Our school’s got a new projector, and having a reputation as a technologically-forward type of person, I felt I should get using it as soon as possible, especially since I was one of the people asking for it!

I decided the best place to start was with the intensive group. They have three hours of lessons every day, and having started in September it’s quite difficult to find new things to keep them interested in the lessons. We’re already using Edmodo outside class (I blogged about it here), have made a video for the IH World YouTube competition and had a couple of sessions where they brought their own laptops, but this was the first time technology was one of the main aspects of the class. The lesson may seem a bit disjointed, but it follows the syllabus – finishing a unit on ‘time’, starting another unit and doing some CAE speaking practice.

We started off lightly, getting them used to the idea of having the projector in class. First, I showed them a short presentation I’d made based on some writing they did before Christmas. As an exam class preparing for CAE, one of the big issues I have with them is handwriting. With their permission, I took some of their work back to England and showed it to my friends and family, asking them to rate how easy it was to read. This was the result:

Next we discussed proverbs and I asked the students to suggest some. ‘An apple a day keeps the doctor away’ was the best example, so I wrote that on the board. I showed them some pictures from the New English File Advanced teacher’s book. (For copyright reasons, I won’t reproduce them here) They were illustrations of ‘time’ proverbs, such as ‘A stitch in time saves nine’ and ‘don’t count your chickens before they hatch’. I asked the students to think of ideas for proverbs to go with each picture and to think about whether a similar phrase exists in Czech. We then looked at the pictures a second time and discussed the ‘correct’ answer for each image, as well as any other vocabulary arising from the picture.

To end the first 90-minute session, I showed them a wordle of synonyms for ‘I think’ and challenged them to come up with 18 phrases. Once they had a complete list, we went to break.

After the break, we got to the ‘tech-heavy’ part of the lesson – I had decided to take the coursebook off the page and create a webquest. We did all of the activities from the book, but based on original sources, with the students using their own laptops in groups of 3 (there are 12 in the class). The complete webquest is here, with a summary below. I provided the students with links throughout, but encouraged them to look elsewhere if they wanted to.

The unit was called “Are you suffering from affluenza?” so their first task was to find out what “affluenza” is and add their definition to a Google Doc.

Next, they looked at an Amazon summary and a review of the book “Affluenza” by Oliver James, which had both been reproduced in New English File, and answered the comprehension questions through a Google form. I encouraged the students to use their own words, rather than copying and pasting. (I’ll return to this later)

In the final section, they used the ideas from the previous stages of the webquest and various other links I provided to add to a mind map using mind42 – a collaborative mind-mapping site – as preparation for a CAE Speaking part 4-style task.

We then returned to using the projector. First we looked at the final definitions and compared the different answers. We also looked at the answers to the reading comprehension, and discussed whether it was a good idea to copy and paste or write using your own words, as well as how useful both strategies are to remember information.

The final part of the lesson drew the previous work on opinions and brainstorming together. Students worked in groups of three to discuss the topics from the mindmap. To help them, they choose one topic which I showed on the board. They discussed it for three minutes, then changed groups and discussed it again. To finish the lesson off, we had a short conversation about whether the mind-map helped them to organise their ideas and how they felt the first and second time they had each discussion.

From my point of view, the lesson went well. We achieved the aims for the lesson, covered everything from the syllabus, and I think the students enjoyed approaching the material in a different way. I have asked them to send me a short email about how they felt about the lesson and whether they thought it was useful or not. When I have their responses, I will ask their permission to share them here.

I do have a couple of questions though:

Thank you for reading and for sharing your thoughts!

One thought on “Playing with a projector”