Elly Setterfield has just written a very useful guide for beginner teachers with tips on how to plan on a daily basis. At the end she asked what her readers’ plans looked like. Here’s one of mine from last year, as I was working out a new style: 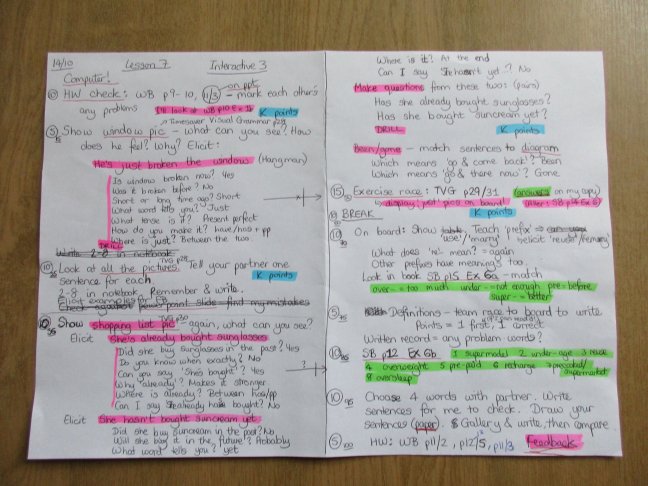 My planning has gone through many iterations, but I’ve now been using this style for over a year. I always use scrap paper, and put it straight into my box ready to go to the classroom as soon as it’s done. I rarely have time to plan in advance nowadays, and occasionally have no time to plan at all. As Elly recommended, you’ll see that:

Previous versions of my plans included typing them up in my post-CELTA over-enthusiastic phase, often in way too much detail, and right at the other end of the scale, scrappy bits of paper with four or five words written on them, in my post-Delta I don’t have the energy for this phase 🙂 I feel like I’ve now arrived at a happy medium.

Once upon a time, I created many different versions of charts to help students work out whether they needed articles or not. Some of them were very complicated because I tried to include way too much information in them. Then I went to the other extreme. Now I think I’ve found a happy medium: 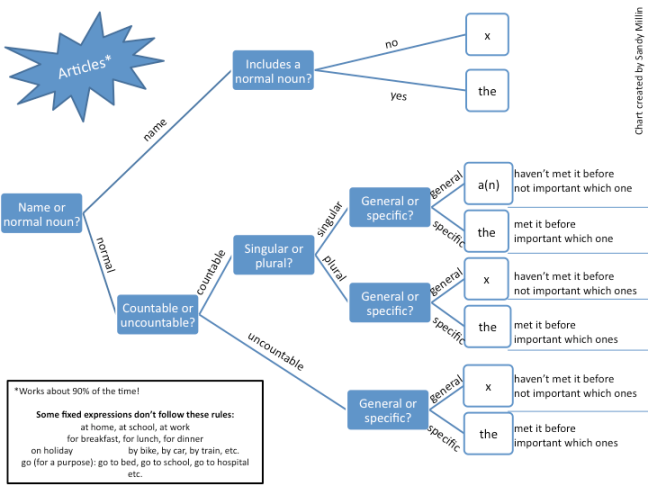 The 90% figure in the box is obviously a complete guess. I’ve found that most article choices can be covered by the chart, though occasionally you have to be a bit creative about it! The box gives students a set of fixed phrases which they can learn to start them off with the exceptions that aren’t covered.

‘Normal noun’ is something like ‘republic’ or ‘kingdom’. This covers the use of phrases like ‘the Czech Republic’, ‘the United Kingdom’, and also ‘the University of Durham’, but not ‘Durham University’. By the way, does anyone know why the latter two uses operate differently when it comes to articles?

Countable > plural > specific covers ‘plural’ countries like ‘the United States’, but also groups of islands like ‘the Maldives’ or ‘the Canary Islands’.

Uncountable > specific covers deserts like ‘the Sahara’ and bodies of water which aren’t lakes, like ‘the Atlantic’, ‘the Sargasso Sea’. Lakes are an exception as they don’t normally take an article: ‘Lake Tahoe’, ‘Windermere’.

Hopefully this will be my final version of this, although I know I’ve definitely said that before…

For the past six weeks or so I have been sharing a flat with a couple who only speak a few words of English and German. When I moved in my Polish was probably hovering around A2, having received a boost over the summer from my reading, writing and use of a grammar book. I was still quite hesitant about speaking, and had only really started to build my confidence during a weekend away organised by my flamenco teacher, again with a few people who didn’t speak any English but who still wanted to communicate with me. Both the people on the flamenco weekend and the couple I was living with were great interlocutors for me, patient, happy to rephrase and repeat themselves as much as necessary, and supporting me in trying to communicate my ideas. The woman I lived with was also very good at correcting me consistently which had a massive impact on my grammar.

Six weeks on, it’s like I’m a different person. I feel like my Polish is probably now into B1. I can speak about most everyday things, my accuracy has improved in quite a few areas, and my confidence is at similar levels to my much stronger languages. I’m not normally shy about pushing myself to speak, which is why the last year has been so strange for me as I was very reluctant to speak Polish if I didn’t have to. I felt like I didn’t really know what language I was speaking in, and it was a real mix of Polish, Czech and Russian. I’m very glad to be past that point, and feel like I’m now in a very good place to continue improving.

On reflection, I’m also wondering whether having such a long (almost) silent period has also helped me to speak more fluently and more confidently at this point than at the same point with other languages. A year of building my vocabulary and listening to and reading whatever I could has certainly helped me improve my understanding, and I feel it’s also made me more accurate when I finally did speak, although I’m sure Czech and Russian probably also had something to do with it.

This is the most conscious I’ve ever been of my speaking progress, as I’ve either already been at least B2 when I’ve been immersed in a language, or I haven’t been in a complete immersion situation for more than a couple of hours at a time. Six weeks of having to speak Polish most mornings and evenings for at least a few minutes meant I had no choice but to communicate. Talking about things which were relevant to me and trying to explain things which had happened during a very eventful few weeks, sometimes with Mr. Google’s help, extended my language and provided a huge amount of motivation.

I know that it’s theoretically possible to create similar situations through the use of Skype conversation partners for example, but I’ve never had the motivation to do it before, confident that I’d eventually learn as much as I needed to through constantly plugging away at the language. After this experience of immersion, I think I might try harder to recreate it with the next language I want to study (not sure what yet!)

I’ve only had two or three Polish lessons, and I’m wondering just how much and how accurately I can learn without having any, even though I know I definitely want some at some point as I need correction. Watch this space…

Having recently recorded a lesson, I thought it would be interesting, if excruciating, to go back and re-watch myself teaching from mid-Delta. You can watch too if you want to join in the fun 😉

These are my impressions:

I wrote the above list while watching the video saved on my computer. I’ve just found the original blog post, and noticed some of my opinions/beliefs have changed too. For example “I think I was speaking at a manageable speed, using appropriate language, with some repetition, as you would get in normal language. I do speak faster to these students at times, but I feel in a grammar lesson it’s better to take your time.” which is not what I thought when watching it this time, especially when I realised they were upper intermediate!

I also realised there’s actually another post about an intermediate class, this time with two videos. Here’s what I thought on watching those:

So it turns out another benefit to recording yourself – you can come back to it later and see how much you’ve improved/developed/changed, just as you might by recording a student and saving it for the end of the year 🙂 Oh, and it wasn’t quite as excruciating as I thought it might be!