Unfortunately I couldn’t make it to Dan Baines‘ talk on sharing whiteboards at IATEFL this year, so I asked him to write a guest post to share his ideas, especially because one of the tasks in ELT Playbook 1 is all about taking photos of your whiteboard and reflecting on them. He’s previously written a post on this blog about Rethinking reflection in initial teacher training. Over to Dan…

When I finished my CELTA many years ago in Prague, I was fortunate enough to be offered a job at the school which I took, starting the following Monday. So, after a very brief trip back home to say my good byes and almost missing the flight back to Prague I started work. It was intimidating. I got 2 days of induction and then received my timetable and the intimidation continued. As is the case for many teachers, my first day of professional, paid teaching consisted of more hours than I had taught in the preceding 4 weeks.

At this time, the school had a very large core of teachers and a really communicative staffroom. Most of the teachers were very experienced and many were also DELTA-qualified. Around peak teaching times, the room was buzzing with people talking about teaching: what they’d just taught, what they were going to teach, what had gone well and what had fallen flat. This was the start of my own teacher development story and how I went from being a nervous new teacher who thought he’d be exposed as a fraud any minute to a competent and then a good and confident teacher. The endless discussions filled my head with ideas and the advice and support was invaluable. The teachers I met in the first two years are still some of the biggest influences on my teaching as I sit here a decade and a half later.

That wasn’t the only perk. I had a full-time teaching schedule and paid holidays. I got lunch vouchers, phone credit and a travel pass provided. The money was poor, but I had real job security and after committing to staying a number of years I had my diploma paid for. Teacher development wasn’t only encouraged, it was compulsory and time was set aside for it every week. CPD just seemed… normal. It was what teachers did.

After taking DELTA and becoming a much better teacher, I did what most people in my situation do. I left the classroom and went into academic management, running the CPD programme in a very similar school to where I started (in fact the same school in a different city) with similar working conditions. After a couple of years of this, I returned to Prague and went into full time pre-service teacher training, effectively leaving the world of language schools behind me.

In June 2016 I returned as the DoS of a small language school in Prague tasked with, amongst other things, developing the teachers. The teaching landscape had changed since I began. Teachers on full-time contracts wasn’t the norm any more – they mostly worked on trade licences. There were no paid holidays and cancelled lessons meant teachers not getting paid. Many schools operate more like agencies than language schools, meaning that their teachers spend a big chunk of their day travelling from company to company. Language schools were in so much competition that rather than selling courses on the expertise and experience of their teachers, they sold them on price, the knock-on effect being that teachers were paid less and had no job security.

In designing a CPD programme I needed to find options that would that would meet the needs and fit the schedule of my teachers. I went for the more traditional approaches.

If the CPD on offer wasn’t accessible to all teachers equally, it felt token at best and far too exclusive, and therefore pointless at worst. So, the challenge was to create something that was:

I’m an occasional Twitter user (@QuietBitLoudBit for anyone interested). I use it almost exclusively for following accounts related to ELT and it could be said that my posts are a bit… samey. Basically, I like posting pictures of my whiteboard after I’ve taught and looking at others. Maybe I’m an exhibitionist and/or a voyeur, but either way, it’s great to see into the classrooms of others and it has given me some great ideas.

If it could give me inspiration, I figured that sharing pictures of whiteboards with some discussion could be an interesting way to carry out professional development with my teachers, so I set up a Facebook group and added some teachers (some local and some from far away). The idea was to post a weekly or bi-weekly “task” for teachers to carry out, which involved taking pictures of and sharing their boards at some point during the lesson. They were then encouraged to comment on the pictures of their peers.

It ticked a lot of boxes. It allowed some form of peer observation, but importantly without the teachers needing to cancel their own lessons or travel. It was development that could be done from anywhere – most of the teachers involved used Facebook on their mobiles, so they could participate from trams or buses as they bounced round the city from class to class or just from home, in bed, at the end of the day. The tasks provided reflection in a guided way, an unseen peer observation task.

This was the first task… 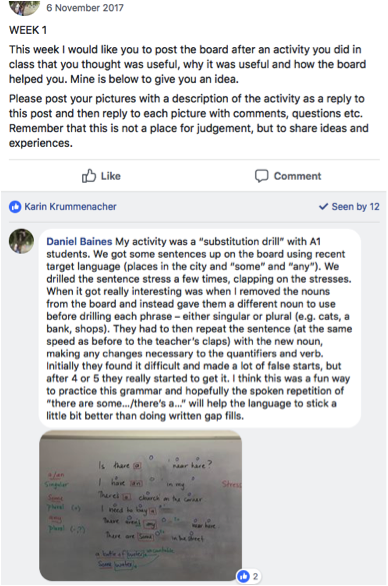 It was deliberately left very open and general. I posted the first one (a picture of a substitution drill I’d done that day) and encouraged them to do the same. The response was underwhelming. One person responded with a picture and explanation, someone else with a description of an activity (both great), but nothing much else. I decided to change the way the tasks were set up. For the posts that followed I posted my board with commentary and encouraged them to comment on mine and discuss a few questions. There was greater interaction this time with good discussion based around how (or whether) to teach subject questions, confidence using the board and phonology related activities. Some, however, fell flat and got no interaction at all. I was pretty disappointed.

As a final attempt to get some interaction and engagement I mixed it up again. I didn’t post my board, but found two similar boards on Twitter (using #ELTwhiteboard – a great hashtag to look up) and asked members to compare them and find a board that they liked and explain why. This was the first task to get the teachers sharing pictures to discuss and it raised some interesting conversation. It was a small victory, but I was still left disappointed at the relative failure of a project I had such high hopes for. 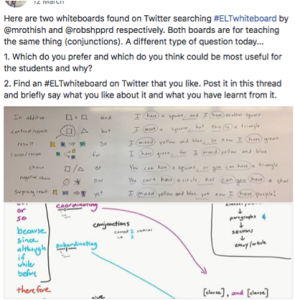 I decided to seek some feedback on the group and why the teachers didn’t participate. A couple of things became apparent quite quickly. Firstly, sometimes people get so involved in teaching that, unlike me, they focus more on the students than taking pictures of what has gone on the board and simply forget. Others feel that what they have produced just isn’t interesting enough to share with the rest of the group or are too self-conscious to open this window into their classroom. Others just prefer to watch from afar.

The biggest surprise was how positively the group was received. When asking a colleague if she found it useful, it was met with a heart-felt “HELL YES!”. She never gets to see what other people do and even just seeing my boardwork helped her with ideas and made her feel better about what she was doing. Others said it had given them great classroom activities to try out and others just liked reading the discussions under the posts, but just didn’t feel the need to contribute. I’d been disappointed, but only because the project didn’t pan out the way I’d envisioned it. It wasn’t a hotbed of activity, but that didn’t mean that it wasn’t useful. Teachers don’t need to actively participate to take something from it, or at least that’s how it seemed.

It’s hard to design effective CPD that serves everyone equally and effectively, and this isn’t it, but it is a nice supplement to a more traditional CPD programme and is very easy to set up and maintain. A few things I realised for anyone attempting to do the same:

I’ve checked my expectations and I’m satisfied overall. The group exists and I’m getting back to posting more regularly in it. If people don’t engage, I don’t take it personally and hope that everyone involved takes something from it and that maybe one day they’ll decide to photograph their work and share it with us all. 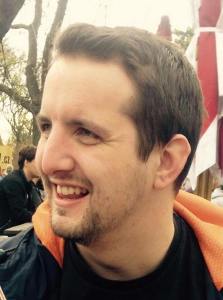 Dan is director of studies at Oxford House Prague as well as a CELTA and Trinity DipTESOL trainer. He really likes whiteboards. Join the group and share your board or follow him on Twitter @QuietBitLoudBit.

2 thoughts on “Free CPD on demand: Boardshare as a tool for unseen peer observation (guest post)”