I started baking bread about 18 months ago, and realised it can be a lot easier than I always built it up to be 🙂

The best gluten bread recipe I’ve found so far is this one from BBC Good Food. I discovered that you can also make it ‘no knead’ by just leaving it for 4-6 hours (possibly longer, don’t really remember!), though that makes it quite sticky and a little harder to work later, even if you add flour. But it reduces the work. Here are the results: 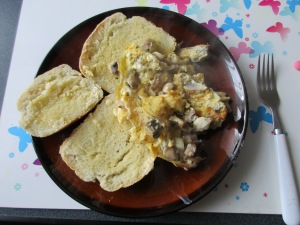 In January, I had to try a low FODMAP diet to see if that would help with my colitis. If you don’t know what FODMAPs are, here’s a quick introduction from Monash University, the people who came up with the term.

[…] the Monash research team discovered a group of short-chain carbohydrates that are either poorly absorbed in the small intestine or are completely indigestible.

Thanks to the Monash team, we now call these carbohydrates FODMAPs: fermentable oligosaccharides, disaccharides, monosaccharides, and polyols. Their poor absorption in some people triggers IBS symptoms.

The diet is designed to try to control the symptoms of IBS, but sometimes it also helps some people with other bowel problems, like ulcerative colitis.

One of the things to avoid in the exclusion phase (the first six weeks of the diet) is wheat-based breads, meaning my weekly bread-baking had to stop. I also had trouble finding low FODMAP bread to buy, as even if you start with gluten-free bread, it has other additives like apple juice which aren’t allowed on the diet. The only one I could get was the Schar low fodmap brown ciabatta, which is really tasty and certified by Monash as being low FODMAP, but also expensive and packed in lots of plastic.

I spent ages looking for FODMAP-friendly bread recipes, but all of them had combinations of flours or ingredients that I couldn’t buy in Poland. In the end, it occurred to me to look up low FODMAP bread recipes in Polish, not English (duh!) and I found this recipe, which you can also read through Google Translate.

It still wasn’t the perfect solution, as I couldn’t find corn starch or tapioca starch anywhere. Eventually I looked up how to replace them with other ingredients (apparently rice flour works just as well), and made something which tasted OK. Later attempts have got better and better 🙂 The recipe below is my very unscientific gluten-free version of Joanna’s original recipe.

I’ve since experimented with lots of different flour combinations, and discovered it doesn’t really matter which combination of 500g of gluten-free flours you use – keep trying until you find that works for you. That means you can make it anywhere in the world (I think!) and don’t need to try to find specialist gluten-free flour mixes like those from Doves Farm in the UK or Bob’s Mills in the US (both of which I’ve used and are good, but only if you live in those countries!) My favourite is about 250g of oat flour, and the rest made up of whatever I’ve got. I’m not going to guarantee it’s low FODMAP, because I have no idea (sorry!)

This is the loaf I made last weekend: 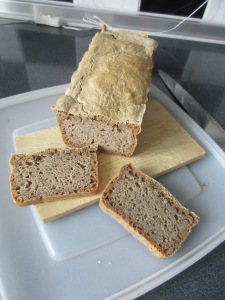 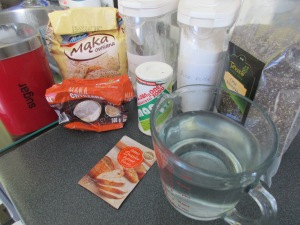 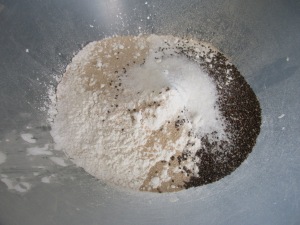 Stir together all of the dry ingredients in a large bowl. 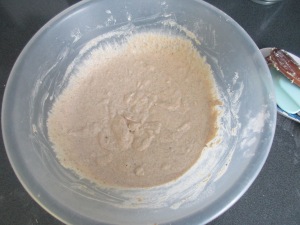 Make a well in the middle. Add the water gradually and stir together. You can add it all at once if you like, but it’s easier to mix if you do it gradually. Don’t worry that the mixture looks very wet – it needs to be. 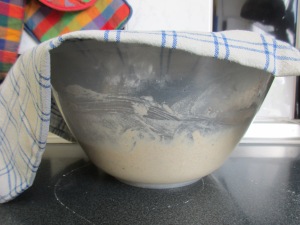 Cover the bowl with a tea towel. 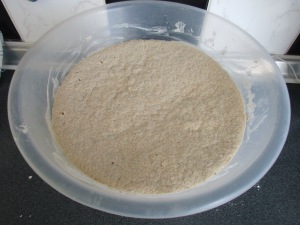 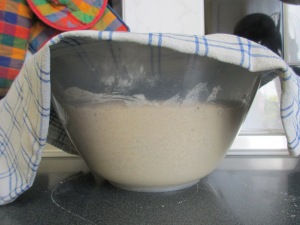 Leave to rise for about an hour. 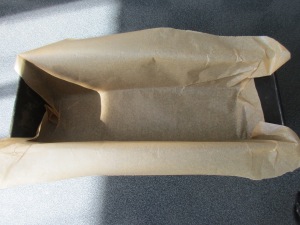 Line a bread tin with a piece of greaseproof/baking paper. Make sure the paper goes over the edges of the tin a little so you can use it to lift the bread out later. It also makes it easier to clean the tin. I normally use the same piece of paper for 2-3 loaves until it falls apart. 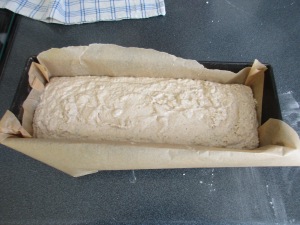 Pour in the mixture.

Cover it with a tea towel and leave to rise again for 30 minutes.

(Cleaning tip: rather than washing it straight away, leave the mixing bowl to dry out, then tip as much of the dried-out mixture/flour as you can into the bin before you wash the bowl.) 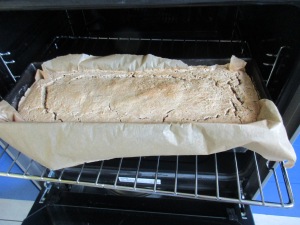 It’s ready when you tap the bottom and it sounds hollow. 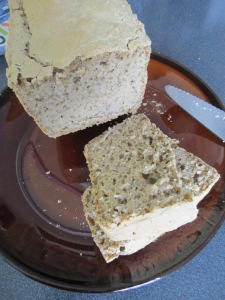 Leave to cool for about 10-15 minutes before you try to eat it – it’ll fall apart when you try to cut it otherwise.

Over the next 1-2 days it will get easier to slice – without gluten, bread falls apart more easily. The fresh loaf lasts for about 4-5 days in a cool, dry place. Because it’s only me eating it, I often put half of my loaf in the freezer for later in the week to avoid waste.