Right from day one, it was clear the London 2012 Olympics would be something special. Danny Boyle’s opening ceremony, for which I was privileged enough to see the first technical rehearsal, was a showcase of British culture and history. It made me truly proud to be British, I think for the first time in my life. I laughed and cried so many times during the ceremony, and spent a lot of my time watching it thinking “Oh my God, I’ll be there tomorrow. I’m actually going to be part of this!” and then laughing or crying again. I stayed up right to the bitter end, and I’m so glad I did, because the idea for the cauldron and the way it was lit were truly ingenious, and clear embodiments of the Olympic spirit and the motto of London 2012: “Inspire a Generation”

My first-hand experience of the Games began early the next morning, when I had a seven-hour coach journey from Newcastle to London. Arriving in the centre at 3pm, we spent an hour being diverted and sent all over South Kensington because of the men’s cycle road race. I was worried the problems on the roads would be a major feature of the Games, but the transport network seemed to be one of the most successful aspects of the whole Games. I managed to make it from where the bus dumped us in South Kensington at 4pm to Leicester Square at 5pm just in time for the matinee showing of the Reduced Shakespeare Company‘s Complete World of Sports Abridged. It was a great way to ease into the Games, and a perfect way to start my ‘holiday’.

The next morning I put on my full uniform ready for my first shift. Chia, who I was staying with, posted a few photos of me on Twitter and facebook, and the messages of support I got were heartwarming. I arrived five minutes before the shift, a little panicky because our pre-shift briefing was already happening, but it turned out there was nothing to worry about as all of my colleagues, and Patrick, our manager, were friendly, helpful and ready to explain everything I’d missed. 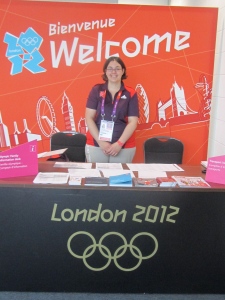 I won’t share the exact details of my job at the moment, but I was lucky enough to see about fourteen hours of weightlifting over the eight days I was working, during which time I learnt all about the ins and outs of this fascinating and dramatic sport. During that time I saw Olympic records, a world record, four medal ceremonies and a dislocated elbow, with the whole gamut of emotions covered in the arena. The support for all of the lifters, regardless of their nationality, was universal, with constant waves of tension and release in emotion and cheering throughout the day. I was amazed that the crowds still found something extra for Peter Kirkbride, the only British lifter I saw, since they had always seemed to be at fever pitch for everyone else already, but they managed it, and I was privileged enough to be there at the time. I also saw more Kazakh flags being waved than I had seen in my whole life put together, with four of their golds coming from weightlifting. I watched Azerbaijan get their first ever weightlifting medal, a bronze, on my first day. And I saw a group of hyperactive Thai fans in their national costume, complete with a horse headdress, accompanied by drums and bells to make sure everyone knew they were there. It truly was sport at its best.

When I wasn’t working, I was watching. I cried when Helen Glover and Heather Stanning got Team GB’s first gold, and I cried again when I heard everyone singing the national anthem at Eton Dorney a few minutes later. On my day off I went to Hyde Park with another Games Maker from my team, Eloise, and watched Gemma Gibbons get a silver in the women’s judo -78kg. We then experienced an emotional rollercoaster of an afternoon watching cycling, with Team GB world records, a disqualification, and the crowning glory of the men’s sprint team getting another gold. As they crossed the line, red, white and blue streamers were released from around the screen and we all cheered together. We then sang ‘God Save the Queen’ together in one of the most emotional moments of my time at the Games.

I shouted at the TV to make the rowers go faster, watching them win two golds and a silver in consecutive races; I willed Rebecca Adlington to swim faster and then was really happy when her post-800m speech showed how proud she was of her bronze medal; I saw the last three games of Murray’s match against Federer and was ecstatically happy when he won, turning round his Wimbledon final disappointment and proving he can win major tournaments when the pressure is on. I watched Ed Clancy win one of his omnium races during one of my breaks, with everyone in the ExCeL workforce break area (about 300 people) cheering him on, and applauding him as he crossed the line first. I watched Bolt’s 100m victory on a Spanish guy’s laptop on the boulevard which runs the 500m+ length of ExCeL. I saw Jessica Ennis finish the 800m, and win the heptathlon, followed by Mo Farah winning the 10,000m with a group of my colleagues after our shift finished. I watched Farah win the 5,000m one week later during a meal with my mum and my best friend. Later we saw pure unadulterated joy on Tom Daley’s face when he realised he had got a bronze in the diving. I watched the end of the women’s triathlon at home, alone, and saw one of the most amazing photo finishes I have ever seen in any sport, after they had been competing for two hours. At ExCeL, I saw live judo, boxing and fencing, including the very close men’s team foil final, won by Italy in the final match, from a total of nine matches. I even went to an event as a fully-paid up spectator with my mum, watching the free routines at the synchronised swimming at the Aquatics Centre, followed by the medal ceremony, with the Russians taking gold.

Wearing the Games Maker uniform turned London into a completely different place. Every time I got on the Tube, I ended up chatting to people, and even missed my stop once when I was talking to a Games Maker working at Earl’s Court at the volleyball. I had a long conversation with a pair of Brazilians from Sao Paolo, worrying about how Rio 2016 will live up to London 2012, and heard from many people that the Games Makers were what made London stand out. At the end of my final shift, we were presented with a relay baton to thank us for our work during the Games. We had our presentation on the weightlifting platform, followed by photos of our team.

Many times during my nine days in London, I looked at the Olympic rings and had to tell myself that I really was there. The emotions I’ve experienced during the last two weeks, the excitement, the joy, the tears (both happy and sad), and above everything else, the pride, at being there and at being a witness to Team GB’s greatest performance, to some of the best sport the world has ever seen, and to surely one of the most successful Olympic Games of all time, will stay with me for the rest of my life. And best of all, I have been able to share it, with friends new and old, people I have never met, and a country which is holding its head high.

But it’s not the end yet, even though the closing ceremony took place last night. In three weeks, I’ll be back again, this time for the Paralympics. I have three more shifts, and Eloise and I have already bought day passes for ExCeL, to revel in the sport all over again. Bring it on!