Today I had the pleasure of attending the annual International House Torun Teacher Training Day, which consisted of pizza, twenty small workshops divided into four slots of five sessions each, a break with more pizza and some yummy Torun gingerbread, a walk to a local hotel, a plenary with Adrian Underhill, and a Q&A session with various experts, of which I am now apparently one 😉

Here are some of the things I learnt:

Thanks to Glenn Standish and the IH Torun team for organising such an enjoyable day. Lots of ideas to think about, as always!

Following in the footsteps of Matthew Noble and reblogging this…
(oh, and I learnt V3 from the Russians!) 🙂

With industry veterans like Geoff Jordan, Hugh Dellar and others out there swinging their hammers at CELTA, I thought I’d take the opportunity to defend the pre-service ELT teaching certificate. Not the CELTA, mind you, but its oft-snubbed, dubiously legitimate little brother. I’m here to defend the humble TEFL certificate.

For the record, I completed a 120-hour TEFL program with 6 hours of teaching practice at the now-defunct ITC Prague (i.e. not an internet-only certificate). The instructors were Geoff Harwood and three other guys whose names I no longer remember (Geoff’s was written on my end-of-course certificate). ITC Prague (as I found out later) eventually failed as a business, but the teaching instruction these guys gave was excellent. The TEFL has had a sort of slow-drip effect on me, and some of what I learned only really struck a chord years later.

Looking back on it from 13 years…

As a Director of Studies, I no longer get much time in the classroom or much time to plan for my lessons (!), but when I do, I like to try and experiment a bit. Here are three things I’ve tried this week:

After introducing a new set of vocab or bit of grammar:

This worked particularly well with gerunds and infinitives, where patterns differ from Polish. You don’t need to know the L1 to do this activity, as students will correct each other. It’s probably the second or third time I’ve done it, and it definitely won’t be the last.

I learnt this activity years ago, but have never had a chance to try it. Having worked with some easily confused words (e.g. remind/remember, avoid/prevent) in the previous class, it seemed like a good opportunity to try it this week. We revised the words at the beginning of the class. I then gave each student a piece of scrap paper with one pair of words on it. They remembered them, wrote their name on it, and gave it back to me. Throughout the rest of the lesson, they had to use the words as much as possible and notice what words other people used. At the end of the lesson, they said what pair of words they thought other students had.

Unfortunately it didn’t work particularly well, as although I tried to change pairs a couple of times, students didn’t really have the chance to use their words with a lot of others in the class, so they could only guess about two or three pairs. Some of the cunning ones used a whole range of words to confuse the rest of the class, which was a good idea. I asked the group if they liked it, but they weren’t that enthralled, so it’ll be a while before I use it again. 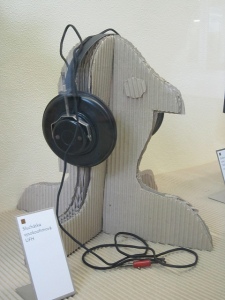 Regular readers will know that I’m quite interested in trying to work out how to train students to become better listeners. A 5-minute audio in our coursebook this week prompted me to find a different way to approach it, as the two tasks in the book seemed like an invitation for boredom (listen once, tick the things the speaker mentions; listen again, make additional notes). Instead, students had to listen and clap when they heard one of the things the speaker mentioned, at which point I paused the audio. They then had to tell their partner/group what they’d heard, and write on a mini whiteboard what they thought would come next. For instance, this could be ‘an example of X’, or some specific phrases they expected to hear. We then listened to check if they were correct. The idea here is to tap into the natural prediction that we do all the time when listening/reading, and show students that they were able to do it in English. We used about half of the audio in this way, then did the original tasks for the second half. It seemed to go down well, and I think the group were generally quite surprised at how well they could do it. I was also very pleased that one of the weaker students in the group was the only person to clap the first time round, as the others were listening for exact words instead of the general message – hopefully this served as a confidence boost.

What did you try in your classroom this week?

On 4th March 2017, I went back to my roots to present at the IH Brno local conference, this year called ‘Sugar and Spice’.

This one-day conference is where I did my first full-length conference presentation in 2011. That presentation was called A Whole New World of ELT and was about all the many ways you could develop your teaching using online resources. My presentations now are much more pared down and focussed, and (I hope!) more accessible because of that – when I first started I tried to pack way too much in there. I was also seduced by new toys at that point and made an all-singing, all-dancing Prezi, which makes me dizzy looking at it now, and took hours and hours to make. Simple PowerPoint slides are definitely the way to go!

The blogs which I recommended in this version were:

I had a brilliant time at the conference, including seeing Hana Ticha present for the first time and taking part in a Live Online Workshop from the conference, which will be available as a recording soon. Thanks for a great weekend, IH Brno!