(all photos in this post are my own)
My name is Sandy Millin. I am an English as a Foreign Language teacher, currently working in Newcastle-upon-Tyne. I came back to the UK after three years in Brno in the Czech Republic because I wanted to volunteer at the Olympics. My journey to becoming a Games Maker, as we are officially called, started four years ago.
I was watching the amazing closing ceremony of the Beijing 2008 Olympics with my mum. As soon as it finished I went on the internet to find out how I could be at London 2012, thinking “There is no way the Olympics is coming to my country without me being involved!” I have always loved watching sport, especially live sport, and the atmosphere in London during the Olympics would be too good to miss.
In summer 2010 I started to get emails telling me that the volunteer selection process was about to begin. I sent in my application in September, and waited with baited breath. About 250,000 people applied, so the wait was quite a long one!
In the meantime, I decided that I wanted to come back to the UK for a year so that I could be here in the run-up to the Games. I was lucky enough to get a job at International House Newcastle, and started work there on July 4th 2011. Two weeks before I started, I had to ask for a day off on July 12th because I had got through the first part of the process and was one of the 100,000 people called to interview. 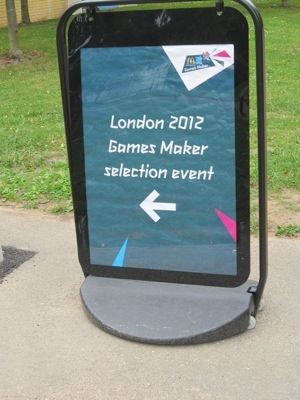 My interview took place in Coventry. I honestly can’t remember anything they asked me, but my answers must have ticked the right boxes because in September I got an email to say I had been accepted as an Olympic volunteer. The next day I got another email, this time offering me a place as a Paralympic Games Maker. I was very excited to hear this, and was proud to have been selected as one of the 70,000 volunteers that will help to make the Games possible. 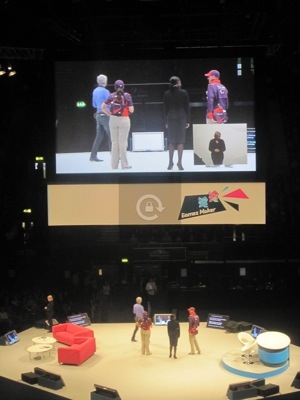 The next step was my training. First off, we had an introductory session with about 12,000 Games Makers at Wembley Arena, presented by Jonathan Edwards. We saw our uniform for the first time, and were introduced to some of the basics of being a Games Maker, regardless of our role. The was a great buzz in the room. It was the first time I started to really appreciate the scale of the whole undertaking.

Two weeks later, I returned to London for role specific training, this time to learn more about what my job would actually involve. At the moment I can’t really say anything about this, so you will have to wait until after the Paralympics to find out what I have been doing! One thing I can say though is that my experience as an English teacher abroad definitely helped me to get my job.

In the middle of May 2012 things really started to step up. Within three days I got an invitation to collect my uniform and accreditation (which I did a few days later), along with details of my shifts for the Olympics and Paralympics. I also found out that I would be working with weightlifting. I have to admit I was a little disappointed at this, as for as long as I can remember we have watched the summer and winter Olympics in my family, and of all the sports involved, weightlifting was probably the one I was least interested in.

However, this all changed when I went to my venue specific training last weekend. I saw the weightlifting arena for the first time and met some of the people I will be working with. I saw the places that I will work and learnt more about weightlifting, which I now think will be a great sport to learn more about. I also saw large amounts of people in the Games Maker uniform for the first time. I was so proud to think that this time next week I will be one of them. So proud, in fact, that when I told my friends about it later the same day I actually cried!
I would like to share my experience of the Games with everyone. I have already agreed to a Skype chat with Vicky Saumell‘s class in Argentina. If anyone else is interested in connecting, please contact me below. If you would like to use this text as a reading exercise in your classes, please feel free to do so, and if you have any useful activities for it, don’t forget to share them. 🙂 Please remember that I am not allowed to share too many details though.
I would like to thank everyone who has supported me on my journey to becoming a Games Maker. I won’t name names as you know who you are, and I would be sure to forget someone! Without your help, your cars, your offers to put me up, and all the other little things, I would never have been able to take advantage of this great opportunity. I owe you!
As I write this I am on the bus on the way to London, very excited to be one of the lucky winners of a ticket to the technical rehearsal for the Opening Ceremony, which I got after entering a competition for Games Makers. In a few short hours I will be on the Olympic Park, then sitting in the Olympic Stadium, for a once-in-a-lifetime experience. I’m sure I won’t be able to tell people about it until after the real ceremony, and I wouldn’t want to spoil the surprise, but I am positive that we all have a lot to look forward to over the next six weeks of the Olympics and Paralympics.
Four days, six hours and ten minutes to go…

If you’ve never seen Wallace and Gromit, here’s a clip from ‘A Grand Day Out’, the programme which introduced them to the world and won the creators an Oscar:

I created this worksheet to revise infinitives of purpose with elementary students, and to share one of my favourite parts of British culture. It is designed to keep the students paying attention all the way through the episode. You can either give each student the whole sheet, or cut it in half so that you have two different worksheets. You may want to pre-teach some vocabulary, such as ‘rocket’, ‘match’, ‘drawer’, ‘escape’…

Apologies for the lack of numbers! The answers are:

Left half (in order as they appear in the episode)

To go to the moon.

To get cheese/To go on holiday.

To see what happens./To get something out./To open the drawer.

To escape from the robot.

Right half (in order as they appear in the episode)

To get some cheese.

To protect their eyes.

To catch the ball.

To get a telescope/a club/glue/paper./To put the cup in it.

If you want to do more work with Wallace and Gromit in class, there are activity books accompanying a couple of the episodes, although I can only seem to find the one for The Wrong Trousers at the moment.

Regular readers will notice that I haven’t been posting much recently. I haven’t forgotten about my blog, but a lot of things have meant that posting has taken a back seat.

I have a few ideas for posts, and hopefully some of these will make their way to a screen near you soon! Thank you for your patience 🙂