When I was working at IH Newcastle, I taught the same group for 20 hours a week, four hours a day, divided into two two-hour lessons. That’s quite a lot of time with the same group, and yet I sometimes found it difficult to get to know the students with any kind of consistency or depth, especially because there was so much coming and going: new students could arrive Monday morning, Monday afternoon and/or Tuesday morning, and every Friday some students left.

I decided to try an idea I’d first heard about at TESOL France in November 2011: journal writing. By the time I left Newcastle I’d done it successfully with groups at three different levels, with slightly different approaches in each case.

For all three levels, students wrote in small A6 notebooks from the school. I think this is the perfect size, as they’re not too daunting and it’s relatively easy to fill a page. When I introduced the journals for the first time, I asked the students to tell me anything they thought I should know about them. They could also ask me questions, about life in the UK, about English, or about me. I think it’s only fair to give them the chance to ask about me, if I want them to talk about themselves in this way. They had time in class to write their response. I then collected the journals and spent about an hour each day responding to all of them, with some correction (depending on whether I wanted that particular student to focus on accuracy or fluency when writing). As far as possible, my response consisted of answering any questions they’d asked me, then asking further questions as a prompt for the next day’s journal writing. The questions could be linked to things the students had told me, or on a completely new topic. The topics we covered in the journals were incredibly wide-ranging, and differed from student to student. They also informed some of the lessons I taught, by showing me what my students were interested in. Here are some of the things I remember talking about:

When the students left my class and/or the school, I gave them their journals to take away with them.

This was a group with a lot of Arabic students who were very reluctant to write generally, but who were very willing to write in the journals. I think this is because it was writing with a real purpose, and they could see that I was correcting them. It was also important for them that I was showing an interest in them as individuals, by responding to what they wrote on a personal level. There were non-Arabic students too, and the journals gave me a chance to see everyone’s writing regularly.

With this group, I did the journals at the end of the lesson, which meant we didn’t always do them if an activity ran over. I tried to leave about 20 minutes, with the first 10 being for a regular spelling test, as this was a real problem area. All of the spellings in the test were collected from the journals – I recorded the mistakes in a list in my notebook, which I then put onto Quizlet. Each time we did the journals, I would dictate five spellings for the students to put in the back of their notebook. After the spelling test, they had writing time to respond to my comments and questions and/or continue the conversation in any way they chose. Sometimes I would ask them all to write on a specific topic. Here are some examples of writing they did after my mum visited the class, in which you can see the kind of feedback I gave. 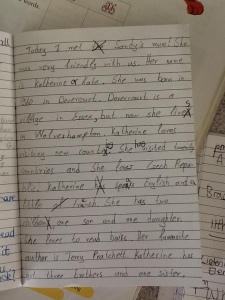 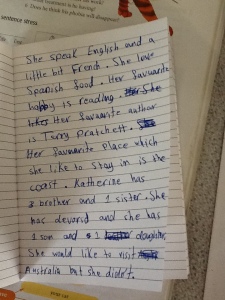 Despite the success of the journals with the pre-intermediate class, I didn’t start using them for a while with the intermediate group – I’m not sure why! When I did, I did a lot less correction with them. We also didn’t do a spelling test as part of the journal writing, although I did collect the spellings and do occasional tests and games with them in class instead. As soon as I started using the journals, the dynamic in the class changed and my rapport with the students really improved as we all got to know each other better. The quiet writing time at the end of most classes was also good for the more introverted students.

Again, I didn’t start using the journals straight away, but I did use them for over two months. For the students who wrote them for that whole time, there was a marked improvement in the quality of their writing and in the length of their responses. What was quite noticeable with this group was that they really tried to incorporate new vocabulary and grammatical structures into their journals. Their written comments and questions were also sometimes language-related. For example, after a lesson on collocations with ‘get’, one student told me about all the phrases with ‘get’ he’d heard his host family use the night before.

I finally learnt from my pre-int/int experience and moved journal time to the beginning of the lesson. As students came in I gave them their journals and they started writing straight away. This was a great way to cater for latecomers, and gave the students the chance to write for as long as they needed to (normally 15-20 minutes) instead of being rushed by the end of the lesson approaching/arriving. While the students were writing, I would normally have a conversation with one or two of the students in a kind of mini tutorial. At this level I underlined problems/mistakes but didn’t correct them, so they had to ask me if they didn’t understand what the problem was. I could also use this time to talk about other areas to work on, unrelated to the journals, and to provide some intensive, targeted practice.

This was the class I was teaching when I left Newcastle, and in my final lesson with them I asked for some feedback on the journal writing process. I asked them:

These are their exact responses:

In my opinion, it’s a very good idea to get them pupils to write.

It’s more interesting than other writing exercises, because it implies a conversation (between teacher and student).

In all my other classes I barely wrote. That’s not very good because it’s one of my sticking points in English and therefore it was the perfect exercise for me.

This student had been a bit frustrating for me, as I couldn’t seem to get through to him. Writing the journal improved my rapport with him, and gave us things to talk about. It also really focussed on his weak point, which was writing as he said. I was pleasantly surprised by his feedback.

The journals are a good way to test student’s writing and get to know them, so I think it is very useful.

What did you think about writing the journals?

It was a good experience. We tried to use the vocabulary we learned before so it was a good way to practise. It’s also interesting because we wrote about thing we like.

How could I improve it?

I have no idea.

1. I really liked writing the journal because it’s a way of knowing each other better and practicing my writing. It’s an interesting thing and I enjoyed doing it. The good thing is that now I’ve something to remember you!

2. As I said before I honestly think that it really helped me, because you corrected my mistakes and I hope I won’t make them again.

3. I’d say that you don’t need to improve it. It’s great the way it is!! It doesn’t need an improvement.

(As you see, I’ve used different ways of expressing my opinion) (something we’d practised in class that week!)

I’ve never done it before. For starters I was surprised, but got used to it.

– make language problems obvious. Sometimes I haven’t been aware of this à good to know so that I can work on it.

– Go ahead with these journals, a piece of individual teaching in a large group!!

– Nothing to complain about J

1. Very positive. Please go on with it. I think it’s positive to learn about your students. You can immediately evaluate them for their writing skill. For the students is good to write about their daily life.

2. For me it was helpful. Actually I know my weak point and I will try to improve it.

3. The booklet should be bigger. Nothing else to add.

As you can see, the journals made a real difference with these groups, and as one of the students said, allowed me to provide ‘a piece of individual teaching in a large group’. Although they probably took an hour or so of my time each day to check, the pay-off in terms of the improved rapport and needs analysis were worth it. When you’re teaching the same group all the time, you don’t necessarily need to do the journals every day, but it’s a good routine to get into (and provides 20 minutes of ready-planned lesson each time!)

I haven’t tried this with my groups in Sevastopol yet, but now that I’ve written this post, maybe I will. I could introduce it, with them making the first entry in class, then give the students the chance to write their journals at home if they want to continue with it. Hmm…

32 thoughts on “Writing journals with students”