I’ve just returned from my first International House Director of Studies conference, which I will hopefully write about later this week.

I did a ten-minute session as part of a ‘speed-dating’ format, where I presented the same idea five or six times – I lost count! Here are my slides, along with the associated links, with a commentary aimed at Directors of Studies, but which will hopefully be useful to anyone who reads it.

This is Shelly Terrell, one of the most prolific sharers of content online. Her blog is Teacher Reboot Camp, where she has a lot of information about using technology in class, along with other areas of teaching, as well as the 30 Goals Challenge. She also does webinars every Friday for the American TESOL institute. I chose this picture to start my presentation because it sums up why I love online CPD – great people, a caring community, and lots of ideas.

This is where my online professional development started. I like Twitter because it’s completely open – you can follow anyone, anyone can follow you. Although I use it less now than I used to, I still look at it briefly every day, and use it a lot during conferences.

A tweet is 140 characters, the same length as a text message. Here’s an example:

‘@’ introduces someone’s Twitter name (or ‘handle’). When it is blue, you can click on it and choose to follow that person or organisation, so that you can read what they are writing about. In this example @KatySDavies and @BCseminars are clickable.

‘#’ introduces a topic on Twitter (or ‘hashtag’). You can click on it to read everything people are saying about that topic. This example includes the hashtag #eltchat, which is one of the most popular hashtags for the English teaching community. 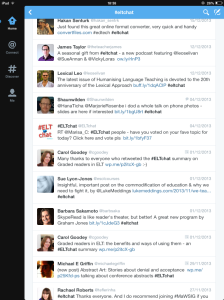 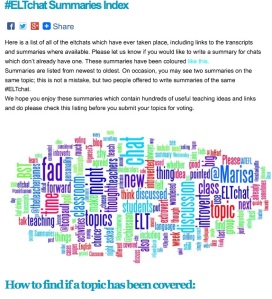 Every Wednesday, at 12pm and 9pm UK time a one-hour conversation takes place using the #eltchat hashtag. The topic for each chat is announced beforehand, and anyone can join in simply by including the hashtag in their tweets. At the end of the chat, one participant summarises the conversation and turns it into a blogpost. The blogposts are collected in the #eltchat summaries index, one of the most useful resources on the web. #eltchat started in October 2010, and previous chats have covered an incredibly wide range of topics. Some chats that might be particularly relevant for Directors of Studies include:

For a more in-depth introduction to using Twitter, take a look at my beginner’s guide.

There are a lot of pages on facebook which are aimed at English teachers. Some are location-specific (e.g. Czech Republic, Turkey), some are by authors (e.g. Hugh Dellar and Andrew Walkley) and others are by publishers (e.g. Richmond ELT).

As far as I’m concerned, the most useful page is Teaching English – British Council, which has nearly 1.5 million likes as I write this. Ann Foreman, who runs it, posts a whole range of links, starts discussions, and shares ideas. It’s a thriving community.

For many teachers, facebook is probably the easiest way of accessing online professional development, as if you already use facebook, it’s a simple matter of clicking ‘like’ on a couple of pages.

Since I started blogging about three years ago, I have changed dramatically as a teacher. While a lot of this is due to the fact I started using social media professionally at the same time and have now done my Delta, blogging has made me more reflective, and forced me to up my game in terms of the materials I produce, knowing they will be used by other people.

There are a huge range of English teaching blogs out there. You can find some of the ones I follow in my blogroll on the right of this page. I also have a Blog Starter List – if you think you should be on there, let me know!

To keep track of the blogs I follow I use a ‘reader’ called Feedly. It’s available online and as a free app. There are many readers out there, and this is just one example. You put the addresses of the blogs you follow into the reader, and it then becomes a one-stop shop, by automatically including all new posts from those blogs, meaning you don’t get a full email inbox, and you don’t have to remember to look at each blog individually on the off-chance there’s a new post. The image above shows you my list of posts to be read at the moment.

Two blogs which are particularly good for Directors of Studies are Be The DOS by Josh Round at St. George International, and The Secret DOS, which is incredibly funny, particularly his post about timetabling.

A webinar is an online seminar, normally videoed, which you watch from the comfort of your own home. A lot of organisations provide webinars, including OUP, Cambridge, Macmillan, Pearson and British Council. My favourite ones so far were the 10-minute webinars at the International House 60th anniversary online conference. Click on the picture below to see them all.

There are now webinars on an incredibly wide range of different topics, so if you have one or two teachers who need input on a particularly topic, but not enough to warrant a full CPD session, you could refer them to a webinar, which you can then discuss with them afterwards. If you want to find a webinar on a particular topic, use the #eltchat hashtag on Twitter or one of the facebook pages mentioned above to ask people to point you in the right direction.

The most important thing about social media is how supportive the ELT community is. If you have any questions about anything mentioned in this post, please don’t hesitate to ask. Good luck!